She gasped at the trickle.

Maroon and warm. And it cast a cold chill down my back.

Hurts inside when a crush observes you getting crushed. 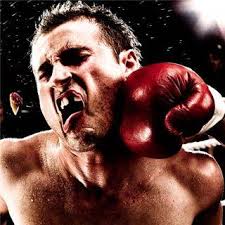 My best friend at the time (who is now an award-winning NYC playwright, director), told me after class how they all watched. Stunned. Subsequently, several classmates became victims to teacher bully.

Although I believe I was the one special enough to donate blood to the cause.

Bullies are always red, by the way. 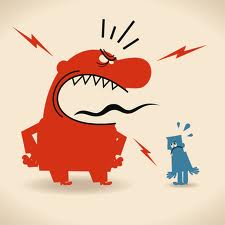 Dead silence within a late afternoon when classes are anxious for the 3 o’clock to bell to cut through the noise of nothing.

A trickle of rosewood warm from the left corner of my mouth.

Splatter soaked up chalk letters on the board, pooled under a white “e” and dripped streams, now purple in color as red and black of board blended.

I felt her green eyes on the back of my neck.

I observed the blood of shame, too.

But take the hit.

“Look you little shit – you bled all over my shirt!”

The score in my head.

The rhythm of rage that pulsates in the brain.

Sharp flares of electric crimson. Deep within a place. A red space.

The one teacher whose name I’ll never forget. Evil who physically and mentally abused several kids, including me – and we never told. Nothing was ever done to stop him. We didn’t talk. It was best to remain silent about these kinds of things back then.

A Tuesday I was afraid to answer a question, stuttered, as he dragged me over a desk by my left arm, to the front of the class and smashed my face against some scientific chalk scribble.

It’s cooler now. Frankly, what remains after decades, is smolder of a thought scarred by embarrassment; although memory of the event is a tinder I work to contain.

On a positive note – The devil died last year.

Too bad it wasn’t sooner.

To lessen the weight of the fire-brick in my head, flames were contained. Focused on other things.

I needed to convince myself the abuse wasn’t my fault.

And actions I’m not proud of, were taken.

To right a wrong.

He was so gracious (and super). A man with a heart of gold. A janitorial giant.

When my mother insisted the front door of our tiny Brooklyn apartment be painted shiny deep red as opposed to blackish-green like everyone else’s, he reluctantly obliged. He was like that. Couldn’t say no to people smaller than him (and most were smaller).

He should have said no.

I asked him. Pleaded.

We didn’t require the attention.

For someone who said she didn’t like the spotlight, mom sure did love the shiny-bright conversation red created.

Rows of dark ways on hinges. Suddenly: A lust-red pop of color.

The red door with the golden peephole became talk of the neighborhood.

And once red is released, it leaves embers that dance around you like fireflies which never lose their glow. When red lands on you, you’ll wince. For a second. Then you’re ok, again.

Although a second can turn to years. Decades.

2). Red is passion. Or a prison. You choose. Best to direct energy to passions which will take you to new highs, lighter shades. In Random Thoughts, I deem Kevin Carroll a muse, a motivational force. Kevin is the author of Rules of The Red Rubber Ball. The ball is a bounce of passion, the stuff that drives you, the lessons that attach you to the teachers who elevate (and not bash your head in).

Kevin writes in such a fun way. His words explode in the ruby-red of passion.

I carry his book in my computer bag. I purchase copies for those in my inner circle (still in expansion mode). When I’m discouraged, pissed off,run over, his sentences inflate me. They add pure oxygen and life.

For my mother, the apartment door was a prison. She kept closed, locked and tight behind red.

Afraid of getting smashed by the world, so never experiencing it. The door seemed to experience quite a bit, however.

Yes, red is a prison, If you allow it to be.

3). To grow, you must bleed. The words of the great James Altucher. You’ll bleed to move forward, learn, become aware of the present, shed the past, not worry about the future. No avoiding the blood. You must admit and share your failures, your pain, to grow, help others grow.

“Sometimes I feel like I’m engulfed in red flames. I don’t want to be afraid or anxious any more.

There are two banks to the river: on one bank are all the regrets, guilt…past.

On the other bank are all the worries, anxieties…future.

I lived most of my life on the bottom of the river, clinging to my fears of being swept up by all the currents. It’s hard to let go. I was afraid to crash into the banks. Everyone else around me was scared also.

But the only way to get to the ocean is by letting go of the fears and anxieties. By not clinging to what was stolen so you can enjoy the energy that is yours forever.”

You must allow red to roll over, swallow you. Awash in it. Then let red spit you out. Don’t fight. Resistance does not help – it creates small slits that become gaping wounds. Big damage. I know.

Once you’re aware of red, let it hit, smash your face.

There, there. It wasn’t so bad.

4). Red in doses. Not so bad. A bit of anger won’t destroy. Actually, it may motivate you. When I found out that devil teacher died, I made it my business to call his family and explain how glad I was he was dead. I shared with them what he did. How he inflicted pain on others.

Because the anger for this man pushed me harder. When I was young, I needed to prove him wrong. When he told me I was stupid and wouldn’t amount to much, it stuck like a red sharp in my gut. He never knew when I succeeded. I did. That was enough.

5). The red in your portfolio can mislead. Investors dislike the red of loss; many become frustrated when investments don’t work out. Understandable. As we hate losses twice as much as we enjoy gains, red signifies lost money, dwindling net worth. This year, there’s red in bonds and emerging markets which means frustration. Don’t overreact. Examine and adjust. With bonds, make sure your duration (a measure of interest rate risk) is three years or less. An objective financial partner can help you prepare for a rising interest rate environment (which can cause deeper reds in ’14 depending on your mix of bonds).

Michael A. Gayed, CFA, Chief Investment Strategist and Co-Portfolio Manager at Pension Partners, LLC., makes the case for emerging markets in a recent article for MarketWatch.

Because red can kill.

Red is a winding road,

A color that sets your mind ablaze.

For the good. Or the bad.

You’ll be glad to tame the dread,

And channel the turmoil,

the red in your head.