I’m sort of numb at Christmas. 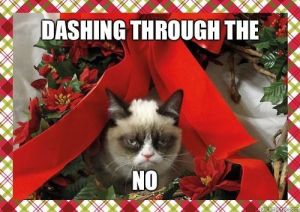 The holiday has clearly lost some of its sparkle.

Christmas reminds me how relationships, like antique glass ornaments, can so easily shatter. Shiny bright one day, swept up in a Dyson the next. As if the sparkle never existed. Unfixable.

The systemic problem with Christmas is it stirs ancient thoughts and ignites the mental bias called anchoring. I dare you to gaze at a tree ornament that you’ve unpacked every year over the last ten (or longer) and not recall “the moment.”

Such strong feelings. The weeks up to Christmas drain me like walking in heavy boots through 5 feet of wet snow. You recall ghosts of holiday celebrations past. Decades merge; 1982 is a freaking blip ago.

The weather the day you first hung the ornament from the artificial Christmas tree; you re-live that, too. The eye color, hair shade, smell, of the person who bought that holiday trinket to make you smile; now the damn thing has a life of its own, and holds a wealth of memories you would sooner forget. But you can’t. The person who bought it is either missing (by choice), dead, or probably has long forgotten the purchase (also by choice).

Admittedly, most of the year you don’t think about it. Until..

You resurrect decorations from the yellowed plastic tomb stored in the garage. From a container marked “CHRISTMAS CRAP.” Then you’re back in the moment and usually it isn’t good. Oh, you can throw the shit away, who would care? But you don’t. Sullen, you hang it again from a tree branch. Another year.

Stab me with a candy cane, it’s fine: I can take it.

This year after exhuming a memory, I lost track of the day. It was silly; I realized I had been sitting on the dusty floor of my garage for an hour and a half. Lost in space, missing time, stuck in “the moment.”

Even cardboard can pull the past into the present. At a friend’s house recently, a collector of vintage kitsch, a flood of past holidays washed over me. There in the corner, looking as new as the ancient day it was originally unfolded, was a Christmas adornment I haven’t seen in at least a decade.

Funny, when I saw it I immediately became mired in a tinsel-laden time warp. I went speeding through holiday backroads; exiting at 1972, the year I first admired my own cardboard and electric (what a lethal combo),

It was a lousy Christmas. My mother after a week-long binge of booze and pills came home from God-knows-where, focused on the fake Christmas tree I just finished decorating. She picked it up from the middle pole and like some form of petite, brunette-elf weightlifter, flung it out our third-floor living room window. Graceful and horrifying at the same time.

I think there were like 6,000,000 lights secured around this thing. In fact, there were so many light sets attached that when the plastic-pine cliff diver advanced from the window, one of the light strings got caught on the way down causing the tree to swing back and forth about 10 feet from the ground like some type of sardonic holiday pendulum.

Two days after, a favorite cousin visited. A savior of sorts. He brought the fireplace along with small, wrapped gifts. On December 27, I had Christmas revisited thanks to Michael. We put together the fireplace, secured the lightbulb behind fake flames. It might as well had been the real thing. The warmth was real. A cousin made my holiday.

Maybe good things come out of Christmas memories after all.

1). Tell People you Love them. Now. Today. Even when they don’t feel the same. Even if they walk away. Even if they don’t respond.Today is the day to tell them exactly what they mean to you and you’ll be there for them because your heart and soul can’t change. It won’t change. Don’t compromise.

2). Christmas is not a day, or a holiday, it’s a mindset. The harsh glow of bad memories are fine even if they pierce like extra-pointy tips of holly. The rotten ones are tough yet you must look beyond them and work hard find the lessons that move you forward. Embrace what was and analyze how it made you the person you are today.

3). In times of despair, who will save your holiday? Be open to the signs. Be open to those you’ve been closed to before. You never know the lessons they’ll teach you, the memories they’ll create for you when you unpack aged ornaments next Christmas.

4). Now is the time to tie up loose ends. With people. With money. Step back. Foster ties with those who create energy, and cut away the ones who take it away. On occasion, you’ll be the one who’s cut and never truly understand why. There’s a humility, a frailty to being cut. It feels hopeless. Like a Christmas tree cast from upper floors. Then, out of nowhere – hope emerges. What a surprise.

At the end of the year, it’s a good idea to double-check the beneficiaries on retirement accounts and life insurance policies. It’s also an opportune time to decide how you’re going to increase your contributions to retirement plans or work to pay off credit card debt in the new year.

My middle name is Michael.

I demanded my mother have it changed after that Christmas in 1972. She obliged out of guilt. It was a way to always keep a special cousin in my heart.

After losing contact with Michael years ago, I found out that he died in 2008.

In a motel room in upstate New York. He was dead a week before they found him.

I wasn’t there. I never knew.

I missed my chance to tell him how much I loved him. How much he saved me that day.

I sent him a message from my heart, as I stared, lost in another place, at a friend’s cardboard fireplace.

I asked Michael to forgive me. I thanked him for what he did for me.

A day to find your fireplace. Your hearth.

1 thought on “A Folded Cardboard Holiday. Four Ways to Stay Alive at Christmas.”