David Mann rolled over. He was late. Again. Third day this week and it was only Wednesday. Different day. Same shit. The wife of 13 years was already downstairs. Busy. For hours. Occupied with the twins as usual. And it was always about the goddamn kids. And why did they need two anyway? Because God decided to play David another shit card, that’s why. And now all she does is bitch and complain when all he’s doing is trying to is scratch out a living. Paying on a mortgage too big for his shrinking paycheck. And the wife wanted another baby? Perhaps a girl this time. No fucking way, David thought. Not going to happen.

She never understood his hours, his increasing time away from home. His work grew longer – like a slow, barely noticeable pull on his favorite indulgence – banana Turkish taffy. Sooner or later something was gonna give. Snap.  He told her deadpan, seriously, how he hated driving hours to see customers and spending time away from the family. Naturally, it was the nature of his business, especially in the face of rising financial obligations, the boys. Five years ago, his excuse was valid. Today, he was best to not say to use the same excuse and she knew not to ask. They both knew the truth…

David’s favorite candy. He liked to smell the wrapper. Had stacks of them in the glove compartment.

David Mann loved being away from 101 Sycamore Street. As much as possible. He just couldn’t admit it outwardly. Or inside, to himself. Best to go with the flow until death came. Good fucking riddance. Inside – relief at the thought. He was glad to be out of the house as much as possible. David was 45, felt 95. Thinking about how his father died at 45, he mustered a smile. Sweet relief. Coming soon? He wondered. Deep down he prayed. Checking out wouldn’t be so bad right now. At least his next trips would be his last. Off to Grayson’s Funeral Parlor, then Peaceful Rest Cemetery. No more long commutes, no more kids, no more wife, no more clanging of pots and pans holding meals he never had time to enjoy, anyway.

Right now, ironically, Emily Mann (formerly Anderson) was taking out her frustrations on the man-sized breakfast of a frying pan. Or the lime-green enamel stove top. Or both. He thought her especially loud this morning; deep down resentment festered when he slept in. After all, the missus was stuck with two whiny, living alarm clocks. With wheat-colored bangs. Twenty-four hours a day. They jolted her from slumber, religiously at 6:30. Never failed. So now, the frying pan, today, was the chosen weapon of pent-up hatred for a marriage that just died away, leaving what David called “scatters.” Like the bones of carcasses he counted along Highway 57 through his numerous business trips that took him deep in the desert.

The trips were so tedious, like his life, his job. It all just fit together. There was AM talk radio, thank god, but most of the time, the babbling hosts weren’t entertaining enough to keep him awake, capture his attention for long. David would pull over, roll down the car windows. Full. Allow the heat of the desert to press and swirl around him in a dry-warm death dance. The faster he went, the tighter the grip. Heat and cold he still felt. Barely. The breeze felt good. And not much felt good lately. At times he felt the heat was a devil. Wrapping him. Suffocating…

David started this crazy game over a year ago. He’d catch a quick glimpse of death from the open window of his red Plymouth Valiant Signet and then along the way, through the dust and gravel of his life, his travels, he’d count. Count again. And again. Count the carcasses as he passed. Carcasses of friends he never saw again, people who died away. Carcasses.

What was left of living creatures after trucks, cars, weather and scavenger birds were done: The “scatters.” Traces of what was full of life once – never truly disappear. Scatters. He remembered how he smiled to himself when he thought up this word. It amused him. He laughed the more he thought of it. Looking around he was glad other drivers didn’t catch the insane guy, chuckling to himself, hair flying in the wind, sweat on brow. Dripping on his new Ray Bans. It was rare for him to spend money on himself. The guilt was too much. With the wife. The boys. Most of the time he did without. Penance.

A pissed-off wife’s alarm clock – a frying pan. Better than the goddamn so called “state-of-the-art” Panasonic alarm clock she picked up at Erickson’s 5 & 10, he figured. Shook his head. Cobwebs fell away.

At least Mrs. Mann gave up waking him for anything. Everything.  A long time ago. David managed to focus. The first time of the day. Certain to be fleeting.

And the fucking new alarm clock never went off?  At least he wasn’t sure. He thought he set it correctly, but David realized his efforts in the dark were clumsy at best. He’d been up all night. Exhausted. Trying to pull a miracle out of the hat to save one of his biggest and most reliable customer accounts.

He was notified yesterday, after 11 years of working together, that Bill Johnson of Johnson Electrical Circuits was ready to jump ship. For an overseas supplier. The death call came from central office.  Tough break. Same product – 20% cheaper. Stinking Japs. What was going on? What the hell happened to the competitive nature of the United States? Sad.

And the wife. Picking up this new-fangled Jap alarm clock with the clicking numbers, lights, bells, whistles he couldn’t operate. Hate began to rise up. She knows I’m losing clients to these bastards but spends my money on their shit. Perfect.

David Mann left the house at 10 that Thursday morning. Flew out. Barely a goodbye. His mind already setting into motion how he was going to lose about 30% of his pay, perhaps his job. And he was scared. Sweating. And it wasn’t even 70 degrees outside.

And now this goddamn truck is gonna mess up my day too? Why are you driving so goddamn slow! I’m going to be late. Are you counting the scatters? That’s my game! Scatters…

Wait…Now you’re on my ass? Did I piss you off? Great. Another wife. In a truck yet. 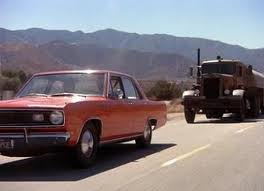 Steven Spielberg was(is) a genius. Early on in his career, in the 70’s, he managed to monitor and then document on film, the human condition. His strength was to show stories behind the stories. Turn stuff inside out until nerves were exposed. Then he danced on them. Until you couldn’t take it anymore.

In November 1971, in an ABC-TV Movie of the Week, Spielberg visually spun a story. On a $450,000 budget. Completed in 13 days. Popular for over 41 years, he tells a tale of a middle-aged electronics salesman traveling in a Plymouth with a motor the size of a scooter, tortured, chased relentlessly by a faceless driver of a 1955 Peterbilt 281 Tanker monster along miles of a two-lane winding highway through a California desert.

The movie is popular, still. It frightens. Still. Why?

Because we’re all David Mann….

We are all “scatters.”

1). Demons chase you. Rise up. When you least expect it. When you’re at a breaking point. When you’ve been kicked. You’re kicked again. At times you’ll be driving the wrong car, carrying the wrong thoughts and that monster truck, the demons will follow you. For miles. For years. Through the heat. How will you shake them off? What takes you to the breaking point. Write it out.

2). Scatters. How many carcasses have you counted? What scares you enough to wish those scatters whole again? Are they remnants of the dead you created? Do they follow you? When you stare out a window what do you see? When you stare into a mirror – what then? What are you driving today? A Plymouth or a Peterbilt? Are you being chased or are you chasing? What’s your test for the day? The week? The month? A lifetime?

3). Demons can be chased. And killed. Or at the least, set free. Establish your boundaries, turn the tables. The demons always believe they have the upper hand. Unfortunately, you’ll need to be tested to determine if this is indeed, true. The demons are overconfident. They can even play nice with others. But not you. To you, they’re deadly. They laugh in their hubris. At your fear. How will you turn the tables, surprise your demons today? Like David Mann did. And for a moment, moments, the trucker, the demon, held the upper hand. The stronger he became. The demon. Until his strength, his speed, overtook him. Right off a cliff. David Mann needed to take drastic action. Play the demon’s own strength against him. How will you turn your demons’ strengths into weaknesses, today?

4). Money demons exist. You’ve acquired them by watching your parent’s relationship with credit, debt, saving, investments. My parents were horrible with money. I observed their financial demons. Lack of life insurance, living only for today, not thinking of tomorrow. No wills, no estate planning. Those demons came for me. I fought them. Hated them. Have you inherited your family’s money demons?

5). What will lead you home? Is it something spiritual? Where’s your safe house? Find it. Live in it. Read it. Use it. Never turn what leads you home into scatters. 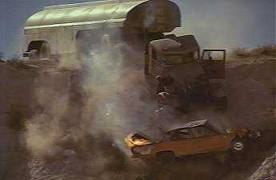 The outwardly weaker being. David Mann. Won the “Duel.”

His demon was outmaneuvered. Off the edge.

And a new day had begun.

2 thoughts on “Duel – Chase Yourself to Sanity in Five Quick Lessons.”