A version of this writing appears in MarketWatch’s Retirement Weekly.

The financial sector still gets a bad rap.

Seven years after the financial crisis.

In his 2013 book “Finance & The Good Society,” economist Robert Shiller describes a utopia where finance can benefit today’s society. He identifies how financial innovations of the past, like insurance and pensions for example, improved the lives of the masses. The lauded professor at Yale shares his suggestions about the future of finance and how the industry can reform and prosper by serving the common good.

I’m sorry to be cynical but you have a better chance of finding a unicorn in your driveway and taking it for a trot over a magical rainbow.

The halcyon days for finance are over.

Today, in the shadow of the Great Recession, forgotten by Wall Street and insidiously faded into the fog of averages, the financial industry is more than ever a marketing machine designed to convince the masses to purchase products they don’t need and to stick with investments that offer more risk for less reward.

The pundits seek to convince, not enlighten. They warn (scare) that if we don’t invest in the manner they suggest, we are in great danger of outliving our money, the boogey-man of inflation will inevitably arise from under our cash and devour our nest egg while we sleep.

From behind their manipulated statistics, these ‘experts’ communicate in serious tones a cozy belief that your household balance sheet has recovered from the Great Recession.

Now, more than any other period since 2008, retirees and those near retirement, are vulnerable to the lies that appear pervasively in financial media.

Survival depends on you knowing the difference between white lies that don’t matter and dark fabrications that have the potential to derail your retirement planning.

There are three financial lies you must ignore to preserve your wealth right now.

Many financial talking heads consider holding cash dangerous to their livelihoods. Why maintain cash when money could be allocated to expensive managed accounts or locked up in investment vehicles where ongoing fees can be charged.

These cunning souls know if they can convince you to remain invested at all times, especially when markets are sliding, then the financial firms they represent can continue to make a predictable revenue stream to appease shareholders.

The experts hope you fall victim to the behavioral pitfall labeled anchoring.  When emotionally connected to a loss, you’ll wait for that losses to recover to your original purchase price before taking action, even if the current value reflects a change in fundamentals. The opportunity cost of sticking with losing investments and waiting for recovery can be detrimental to your financial health.

Gregory L. Morris, author of “Investing With The Trend,” showcases how it takes on average, five years to recover from a 20% loss in stock prices (as represented by the S&P 500). Five years can add up to a healthy stream of fees if you ‘stick with the program.’ Don’t you think?

So, let me ask: How many five-year periods can you survive in the span of a human life, to break even?

Never underestimate the value of cash as a component of your long-term asset allocation.

Mainstream media will never embrace the concept of holding cash. They’ll tout long-term returns as the reason to remain invested in both good times and bad. Most individuals lack the “time” necessary to truly capture 30 to 60-year stock return averages.

For individuals trying to save for retirement, there are several important considerations with respect to cash as an asset class:

It doesn’t mean you should be 100% in cash. Holding an increased allocation to cash during periods of uncertainty provides both stability and future opportunity.

When inflation is low and stock valuations as measured by Robert Shiller’s CAPE ratio is at 23x earnings which has historically represented the peak of secular bull markets, the significance of holding cash is revealed.

As the chart above outlines, if you purchase stocks when the CAPE is 6x and switch to cash at 23x, the adjusted return of $100 increases dramatically over time. Of course, cash will lose out during periods of above average inflation like in the 1970s, however holding and investing cash during periods of low valuations produced substantial outperformance compared to waiting for lost capital to recover.

At this juncture, increasing portfolio cash to 20-30% to weather the storm will not kill your returns. As a matter of fact, your portfolio will survive. You won’t need to alter your retirement plans. 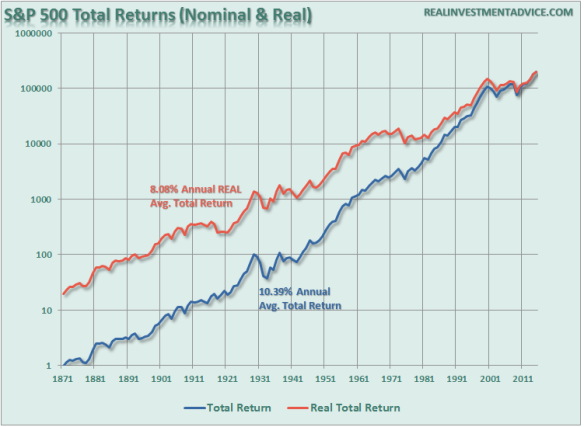 This lie may be the most lethal. Recently, I heard a pundit on a popular financial channel flippantly throw out a statement to an afternoon television audience. He said not to worry: Stocks average 10% a year if you hold tight.

Currently on their Twitter feed, a popular roboadviser called WealthFront which is an electronic portfolio asset allocator, regularly shares a chart alone and within blog posts. It shows how the growth of a dollar invested in the stock market appreciates to roughly $34,000 if invested from 1871 through 2015.

The president of the United States was Ulysses S. Grant.

Orville Wright of the Wright Brothers was born in August of that year.

Is it realistic to base return assumptions for retirement planning on numbers many pundits share in the national media?

From 1871 to present the total nominal return was 8.08% versus just 6.86% on a “real” adjusted for inflation basis. While the percentages may not seem like much, over such a long period the ending value of the original $1000 investment was lower by an astounding $270 million dollars.

Since 1900, stock market appreciation plus dividends has provided investors with an average return of roughly 10% per year. Historically, 4%, or 40% of the total return, came from dividends. The remaining return (60%), came from capital appreciation that averaged 6%.

There are several fallacies with the notion that the markets long-term compound at 10% annually.

The market does not return 10% every year. There are many years where market returns have been sharply higher, significantly lower or flat lined.

The analysis does not include the real world effects of inflation, taxes, fees, and other expenses that subtract from total returns.

SHOCKER – You don’t have 144 years to invest. Using ‘perpetual’ holdings periods for something as finite as a human life is plain irresponsible.

Lie #2 will allow false hope to permeate your retirement planning outcomes. Incorporating unrealistic return projections increases the likelihood of shortfall surprises later in retirement. Perhaps at an age where returning to work is highly unfeasible.

This whopper will indeed sneak up on you. If you’re three years from retirement or in retirement, now’s the time to re-visit the return estimates that were used in your financial planning analysis.

It’s like saying repeatedly – a paycheck for life should always be avoided.

The wide universe of annuities are given an unfair rap as financial professionals with an agenda play on investor misunderstanding. With irresponsible blanket statements like ‘annuities are high commission and good for brokers, not for you,’ this group exploits the masses’ ignorance for their own gain.

They play on a human behavioral pitfall called heuristics. Heuristics are mental shortcuts we employ to digest the onslaught of information we’re slammed with daily. As busy individuals with access to limited information, we create rules of thumb to quickly come to conclusions and make decisions.

Annuities, specifically variable annuities, a blend of insurance and mutual funds, have been the subject of bad press and regulatory scrutiny for decades. Justifiably so. With exorbitant fees and generous commission structures these products were sold inappropriately in many documented cases.

Today, novice recipients of the adverse messages recall how they were told, read or heard somewhere that annuities must be avoided. So it must be true.

What an injustice to investors who would benefit from these products.

To mitigate the risk of outliving a nest egg or as a replacement for conservative investments like bonds, deferred-income and immediate annuities can be used effectively to supplement Social Security and portfolios that cannot carry the retirement income responsibilities alone. These annuity types are affordable and can play an important role in a holistic financial plan.

To understand the truth about annuities avoid the ‘real story’ touted in media and advertising. There’s something ‘Fisher’ about this bullshit. As in Ken Fisher.

Instead, check out your resident state’s department of insurance website for objective information. Meet with a Certified Financial Planner who is compensated on an hourly fee basis to understand annuity types and to determine if a lifetime income option, in addition to Social Security, is suitable for your personal situation.

Now more than ever.

As we appear to be entering the storm of a bear market in stocks.

To survive you must dig deeper, stay vigilant, possess a healthy dose of skepticism.

Because pundits will not disappear as quickly as your wealth can.

And finance and the good society shall remain just a fairy tale.

All charts are the courtesy of Clarity’s Financial Chief Investment Strategist Lance Roberts.